Coffeeneuring – Backtracking to My Final Stop

The rainy season in Belize has me backtracking for my final stop of Coffeeneuring 2015.

We are in San Ignacio, Belize through the end of the Challenge. Located near the border with Guatemala, San Ignacio is a great base for visiting Mayan sites but it is flooding! My hopes for a coffeeneuring trip here have been washed down the hillsides along with the pouring rain.

Oh Canada! Reading about the election results on my favorite porch

I’m reaching back to our visit in Austin for trip number 7! (It’s a good thing I include coffee stops in most of my rides….)

The Fun Stuff – My Coffee Stop

My coffee stop was at Pacha on Burnet Road in Austin. This was my local neighborhood shop for many years when I lived in the Rosedale neighborhood. The Pacha Latte is their specialty drink which can also be blended with frozen banana to create a Pacha Shake. Really delicious!

I enjoyed a hot Pacha delivered by barista Angel – who is a bike polo aficionado. It was a relaxing day, reading the New York Times on my tablet.

This ride was actually reconnaissance for a local call to action for the bike community. The bike lanes on Mesa Drive were now a controversy.

Historically, the City of Austin hadn’t posted signs (and thus hadn’t enforced) its ban on parking in bike lanes. Not a huge problem when Austin was a sleepy university town putting bike lanes down on streets with few cars on them. Those days are long gone with Austin growing like crazy!

Austin’s public works department has chosen to fully implement the ban over time as part of routine street maintenance. This is seen as a cost and time effective way to build out the bike network as specified in the bike plan. Striped bike lanes (and no parking signs) are added to designated bike routes whenever streets are resurfaced – which can mean that parking is officially removed on one side of the street to create car-free bike lanes.

What should have been a routine project with removal of parking on one side of a neighborhood collector street to connect the bike lane segments previously completed along Mesa Dr has a few residents calling on their Council Member to ensure parking stays on both sides of the street. And City staff is responding to these desires as part of an established process.

A process for evaluating community needs as input to the street design process was developed over a number of years with the participation of the Bicycle Advisory Council. Along with other volunteers, I spent many hours helping to create a process that is balanced and can remove undue political pressure that wealthier neighborhoods had been able to exert in the past.

For example, churches along bike routes have been allowed to keep two-sided street parking on Sundays and Wednesday nights. As a community, we would prefer to reduce the need for small churches to build parking lots for many reasons – impervious cover contributes to flooding, churches serve neighborhood needs so we want them to stay in the neighborhood settings, and it is not always a wise use of church funds. This is generally seen as a balanced approach to allocating shared road space.

In other cases parking has been removed completely to ensure dedicated space for cyclists as part of the larger network connectivity.

I was asked for input on the controversy by an advocate living in the neighborhood since I previously served on the City’s Urban Transportation Commission in addition to the BAC so have knowledge of the policies that govern these types of projects. I know that City staff collects data on off-street parking capacity and actual usage for the street before they create preliminary designs to be presented to the  public. This ride was my own unscientific data collection.

The street undergoing the redesign is strictly residential with ranch-style homes – all with 2 or 3 car garages. No garages appear to have been converted to living space (which is common in less wealthy sections of town.) Driveways are both standard and semi-circular providing parking space for 2+ cars each. That leaves all homes with a minimum parking capacity for 4 vehicles with most having more space. (All homes have plenty of parking space on their private property.) There are no churches or other community destinations that would require public parking.

From all appearances this should have been an easy project with neighborhood input on east or west side parking preference.  Sigh…..

A few neighbors complained and City staff backpedaled on the minimum bike lane design specified in the adopted bike plan. (Car-free bike lanes along the entire stretch of road.) A revised proposal was put forth by staff to leave a wide shoulder to be shared by parked vehicles and cyclists – maybe some time restrictions would be added during rush hour. This suggested design requires cyclists to merge in and out of the travel lane.

Anecdotal experience indicates that parents prefer to keep their children off this type of “shared” facility. Even on Saturday afternoons, most families ride on the Shoal Creek sidewalks near Northwest Park. Drivers speed on the collector streets and do not consistently yield to cyclists merging into the travel lane. The ensuing conflicts are intimidating for beginners of any age.

The Far West neighborhood where Mesa Drive is located has spent a number of years and significant money and effort encouraging kids to bike and walk to school. Look at the photos below to see the success of these efforts. The bike racks are overflowing! 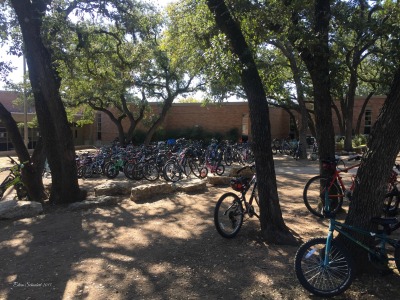 The bike racks are overflowing at school!

Start locking up to the trees kids

And even more trees

This school has an encouragement program that has helmet rfid tags that count trips and awards prizes to the kiddos. That means that they have actual data counts for child riders in the neighborhood. Assuming 10 kids consistently ride this corridor now, can we put that need above 10 home owners desire to have street parking directly in front of their home?

In compromising on the design, my opinion is:

I haven’t heard what the final design will be.

I am now done with the 2015 Coffeeneuring Challenge!

2 thoughts on “Coffeeneuring – Backtracking to My Final Stop”

Tell Me What You Think Cancel reply

This site uses Akismet to reduce spam. Learn how your comment data is processed.